The Battle of Withlacoochee and Its Relevance

Because of the possibility of Green writing about her father, Long needed to address the event which permanently tarnished her father’s reputation: The Battle of Withlacoochee.

Richard Keith Call (1792-1862) was a man defined by his bold demeanor and actions. He enlisted to fight against Indians at an early age, serving under then General Andrew Jackson. Call became close to Jackson and joined his group of close associates and supporters (Cusick, “Richard Keith Call” 45). After resigning from his military career which spanned the War of 1812 and the First Seminole War, Call made Florida his permanent home in 1822 and entered the law profession. In 1923, he began his term as a delegate of the territory to the United States House of Representatives. Throughout his political career, he would demonstrate his strong loyalty to Jackson. As a reward to his faithful friend, Jackson appointed Call to the position of Florida’s territorial governor for the first time in 1836. The beginning of the Second Seminole War and Call’s military response would characterize this first term.

Duncan Lamont Clinch (1787-1849) was a U.S. military commander from North Carolina who served during the Seminole Wars. He is most known for his involvement in the attack on the fortification known as “Negro Fort” during the period of violent conflicts between native peoples and U.S. forces after the War of 1812. As an active member of the U.S. military, Clinch was responsible for the regulars from the U.S. Army at the onset of the Second Seminole War. In 1836, not long after the nearly seven-year war had begun, he resigned from his position. He entered politics as a representative of Georgia in Congress in his later years (McCormick).

After a period of unrest between native Seminole groups and white American settlers wanting continued expansion into the Florida territory, the Second Seminole War began in earnest on December 28, 1835, when Major Francis L. Dade and almost all of the soldiers serving under him were killed in a Seminole ambush known as the Dade Massacre. A few days after this first attack, as they were on their way to attack a Seminole stronghold in the area called the Cove of Withlacoochee, Call and Clinch encountered the Withlacoochee River. The river was much higher than expected, and the soldiers had few safe methods that could be used to efficiently cross. After hours of transport, Clinch’s regulars were ambushed by Seminoles led by Osceola while separated from Call and his volunteers by the river. Although many of Clinch’s regulars were able to retreat and survive, the conflict, later known as the Battle of Withlacoochee, was another defeat for U.S. forces (Cusick, “Richard Keith Call” 48). 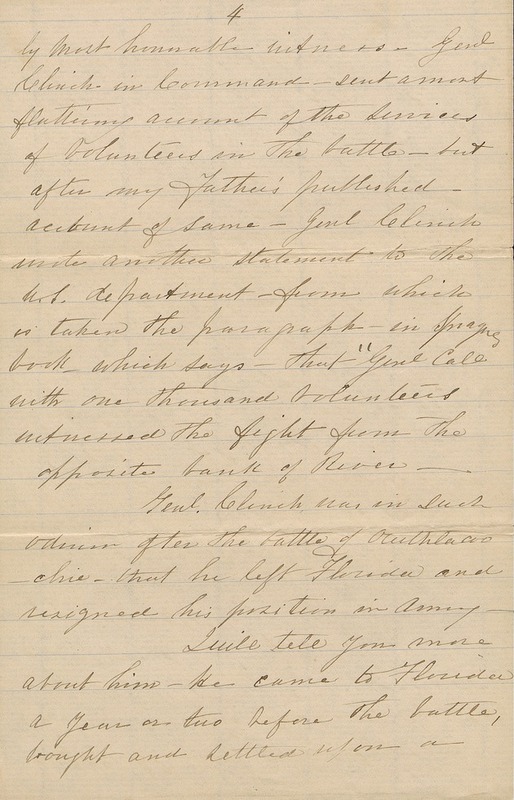 Long discusses Clinch's changing accounts of the Battle of Withlacoochee. 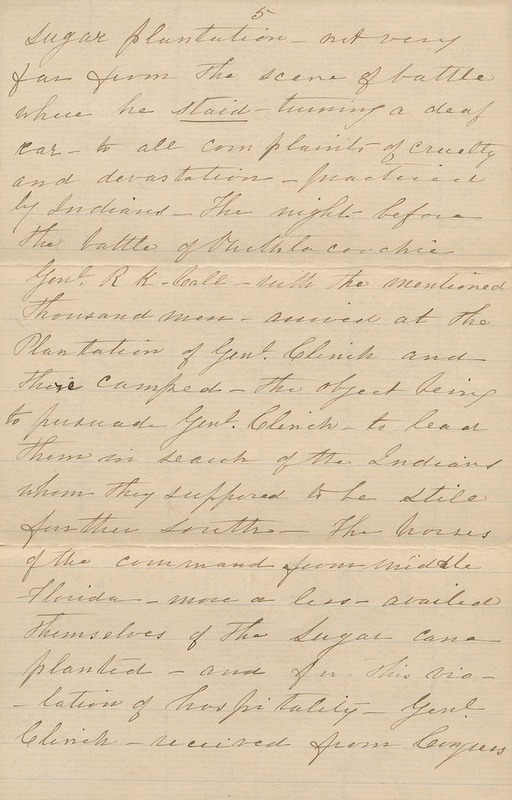 Long writes about Clinch's ambivalence towards fighting the Seminole. 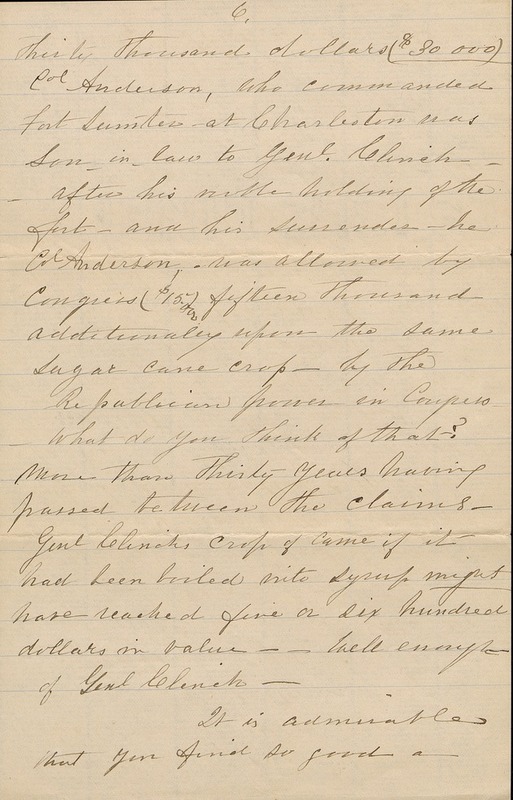 Months after the battle, Clinch blamed Call and his militia for the defeat. He claimed that Call and the volunteers had not supported him in the battle, which led to the Seminole ambush overwhelming them. He went as far as to claim that Call had prohibited the militia from crossing the river to support Clinch’s troops. James G. Cusick, the curator of the P.K. Yonge Library of Florida History at the University of Florida, notes, “This accusation became so stinging a blot on Call’s record that almost two years after the battle, he ran a point-by-point rebuttal of Clinch’s statements on the front page of The Floridian, taking up the entire front page” (Cusick, “Richard Keith Call” 49). Call would highlight the impossibility of transporting his troops over the river quickly enough to support Clinch and would continue to repeat his version of events throughout his life.

Despite this controversy, Call had a chance to redeem his reputation when President Jackson asked him to control U.S. forces in 1836 during the early stages of the Second Seminole War (Baptist 156). As commander, he was able to secure significant victories and invaded further into the Seminole’s territory, even though his efforts were plagued by logistical problems. He failed to win what historian C. S. Monaco refers to as “the type of traditional battlefield triumph that he promised the president” and was later relieved of command by Jackson himself (86). Although he would be appointed to the position of territorial governor of Florida again in 1841, his failure to succeed in his campaign against the Seminoles to Jackson’s satisfaction would ensure that the affair at Withlacoochee would remain a negative mark on his legacy.

Long would continue the defense of her father’s actions at Withlacoochee even after he had passed. In Florida Breezes, Call is described as having succeeded in crossing the river in a canoe to aid Clinch in his retreat (Long 204). Long also labels him as a hero for his actions during the battle in her narrative (206). Needless to say, Long inherited her father’s bitterness towards Clinch for his account of the battle and Call’s actions during it. Defending her father’s position that it was impossible for all of his volunteers to cross the river in time to support Clinch, she states that his report was supported by “most honorable witness.” She writes that Clinch’s first report of the battle was “a most flattering account of volunteers in battle” but highlights that Clinch’s second report was the one which would tarnish her father’s reputation. As a consequence of this apparent betrayal, she uses the letter to bring into question Clinch’s character, demonstrated by her unflattering portrayals of Clinch’s resignation from the army and her accusation that he was “turning a deaf ear to all complaint of cruelty by Indians.” In her anecdote regarding Congress’ repayment for damage to Clinch’s sugarcane crop, she makes sure to note that Clinch had not lived in Florida for long. After criticizing Clinch, she turns her criticism towards some of the most well-known historians of her time.