Long’s Criticism of the Existing Historiography of Florida

The historiography of the Second Seminole War and Florida more broadly plays a significant role in the letter. In the final pages of the letter, Long criticizes some of the most highly respected writers of Florida history at the time while she discusses Green’s work.

George Rainsford Fairbanks (1820-1906) is the first target of her criticism. He had been born in the North and started practicing law in New York before he moved to Florida in 1842, where he would spend most of his life (Fleming 5). As Long mentions in the letter, he remained in the law profession in Florida, serving as a clerk to Judge Isaac H. Bronson. One of his earliest works as a historian was delivered in the form of a lecture on early Florida to the Historical Society of Florida in 1857 (Fleming 5). In the decades after, he would gain fame and influence from his published volumes such as The Spaniards in Florida and The History of Florida. In 1902, he helped to found the Florida Historical Society and became its first president (Fleming 7). 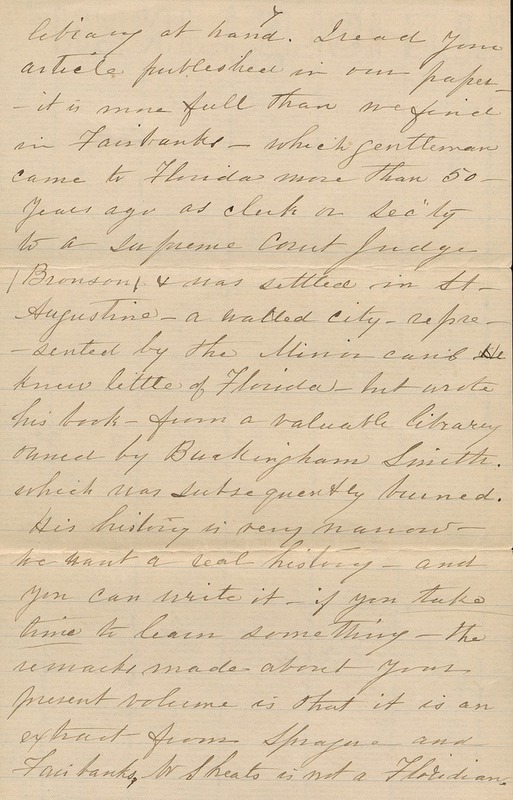 Long discusses Fairbanks' background and the quality of his work.

Since Fairbanks was a highly respected writer of history books who was still alive and would soon become the president of the Florida Historical Society, his status makes Long’s criticisms of him stand out. She claims that “[Fairbanks’] history is very narrow; we want a real history.” She also asserts that he “knew little of Florida” as someone not from the state, although she admits that his writings came from the “valuable” manuscript collection gathered by Thomas Buckingham Smith.

Smith (1810-1871) was an antiquarian, manuscript collector, and translator who grew up in St. Augustine. He wrote about the Spanish exploration and conquest of Florida to prove that his state had a rich heritage comparable to that of New England (Kagan 98). Long appears to give Fairbanks’ work some credit for using Smith’s work to write his histories, as Smith was a dedicated Floridian.

The other historian that faces Long’s criticism in her letter is John Titcomb Sprague (1810-1878). Sprague was an American military officer from New England who served in the Second Seminole War from 1839 to the end of the war in 1842. He served as an aide to then Col. William Jenkins Worth and later married Worth’s daughter. After the war, he remained in Florida and was in control of Indian Affairs in the territory. He returned to the North in his later years and spent much of the 1860s and 1870s in New York (“Sprague Collection”).

In 1848, he published The Origin, Progress and Conclusion of the Florida War. It was the first attempt to write the history of the entire war and would remain the only attempt until a hundred years later (“Sprague Collection”). In this book, Sprague drew more from Clinch’s account of the Battle of Withlacoochee, writing, “Four hundred and sixty volunteers, under Gen. [R.] K. Call, were spectators of this conflict across the river, excepting twenty-seven, who, under Col. Warren and Lieut. Col. Mills, dashed over in spite of every obstacle, and by their firmness and activity rendered efficient service” (92). As the most influential work on the conflict in the nineteenth and much of the twentieth century, Sprague’s account of the Battle of Withlacoochee in the Florida War cemented the incident as a permanent and public mark on Richard Keith Call’s legacy by favoring Clinch’s perspective. 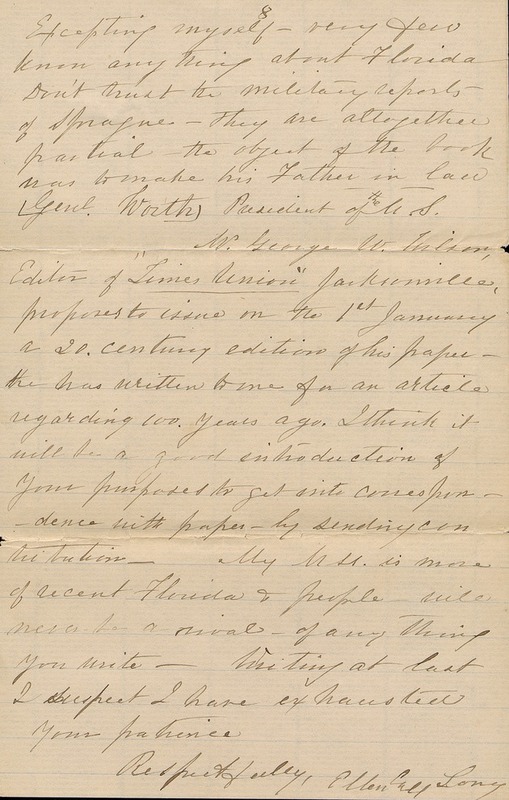 Long disputes the reliability of Sprague's The Florida War.

Consequently, Long argues that Sprague’s work is “altogether partial”. She warns Green against trusting the Florida War. She questions the credibility of the work by arguing that it was written to benefit Brevet Major General William Jenkins Worth’s political career rather than to simply honestly report the events of the war.

Her criticisms of these well-known writers of history served two purposes. One was the defense of Call’s account of the events at Withlacoochee, which she needed to present to someone considering writing on her father’s life. A failure to address Sprague’s presentation of the battle could have resulted in a biography that would be, in her opinion, unfairly biased against her father’s account. Interestingly, Green’s writing on the battle in School History of Florida does not address the controversy over Call’s involvement (Green 239). Still, the uncertainty over his stance on the matter would be enough for this to need to be addressed by Long.

The second purpose of criticizing contemporary Florida historians was to defend Green’s work in School History of Florida.