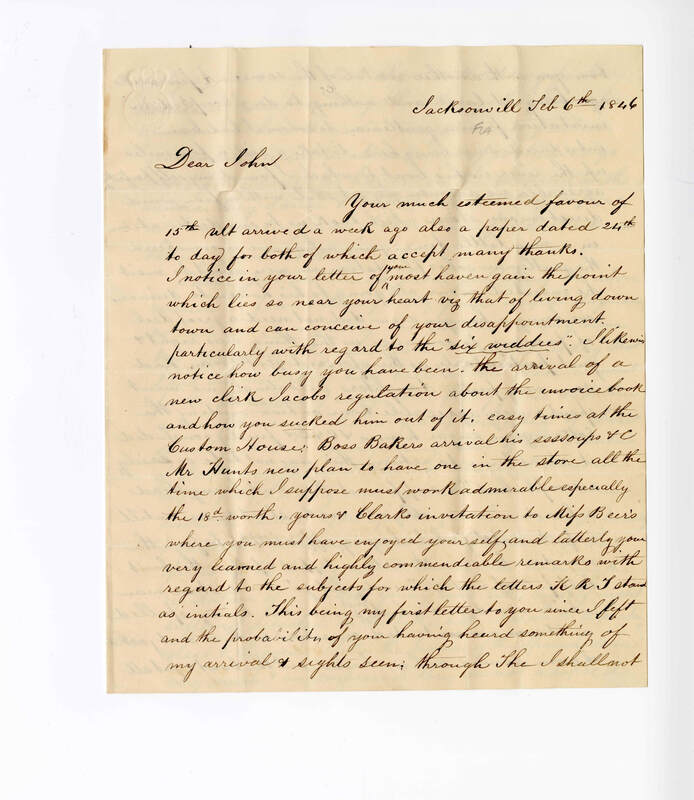 In this letter, held in Special Collections in the Thomas G. Carpenter Library at the University of North Florida, sent from Jacksonville, Florida on February 6th of 1846, S.S. Hyatt writes to a man named John. This letter primarily concerns Hyatt’s visit to a sugar and cotton plantation in the local area and a masquerade party he attended.

During this period, fifteen years prior to the start of the Civil War and one year after Florida was granted statehood, many social, cultural, and economic factors began to change in the region of northeast Florida, including in the city of Jacksonville (Statehood). Plantations producing cotton and sugar, such as the one described by S.S. Hyatt, were in a unique economic position at this time. The large plantations of northeast Florida paralleled their counterparts across the united States by relying on skilled slave labor in a variety of jobs. However, these crops would never dominate in northeast Florida as cotton did in Middle Florida (Rivers 75). Sugar prices collapsed between 1840 and 1870, making it impossible to sustain production. Soon, northeast Florida would no longer participate in sugar production (Wayne 43).

With the changing socio-economic factors in the area, racial relations in Jacksonville also began to change. It is suggested that northeast Florida provided a more tolerant atmosphere for enslaved men and women. (Rivers 76). For a minority of East and West Florida slaves, towns such as Fernandina, Jacksonville, St. Augustine, Tampa, and Apalachicola afforded conditions of work and life that were slightly better than those commonly endured by farm or plantation workers. Rivers notes a comment made by Union general and Freedmen’s Bureau head Oliver O. Howard from Tampa in 1857, who stated that you would not know the men and women were enslaved unless you were told (Rivers 78). Perhaps this explains why Hyatt does not describe any enslaved men or women in his letter or perhaps Hyatt experienced one of the plantations owned by the men and women who were part of mixed race families that were common in this area, such as the Kingsley family (Family and society).

In this period, northeast Florida was also beginning to embrace tourism from northerners as a means of covering up long-standing conflicts in its history. It is suggested that "Florida planters masked the still-simmering struggles for power that characterized the conquest of the southern frontier" (Hillyer 46), attempting to rewrite their history as a southern plantation state by creating "a myth of an epic past" (Hillyer 46). Native American cultures were also beginning to be placed on display as spectacles and tourist attractions (Hillyer 56), which is notable considering S.S. Hyatt’s recollection of several men dressed in Native American clothing at the masquerade party he attended while in the area. In describing his visit to John, S.S. Hyatt paints a picture of a Jacksonville that appears to be a desirable site for tourism, indicative of the success of those who sought to create the image of Florida as an ideal paradise which was, and remained, "free of conflict” (Hillyer 46).