A letter by A.B. Temple to John 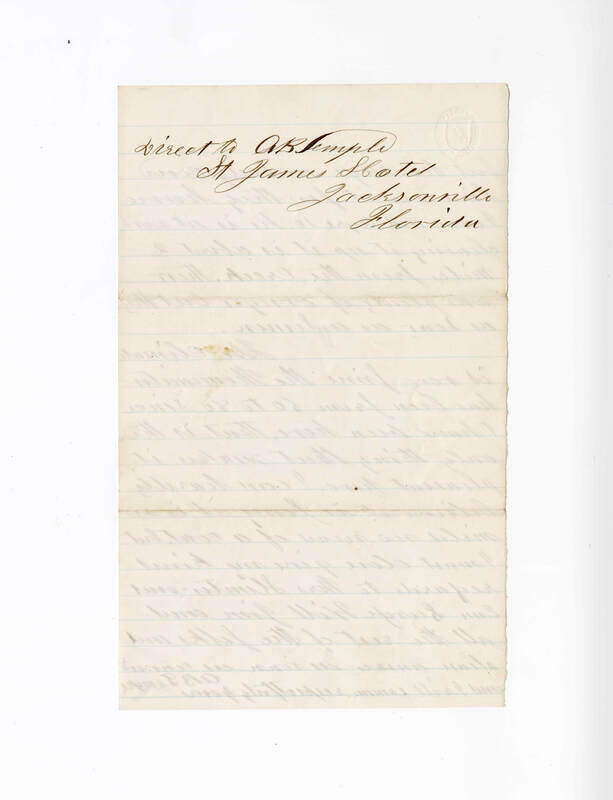 A. B. Temple’s letter to A. R. Hunter, held in Special Collections in the Thomas G. Carpenter Library at the University of North Florida, provides insight into the life of a wealthy Northerner vacationing in the southern state of Florida. Temple’s descriptions to Hunter of hunting, fishing, travelling, and sightseeing present Florida as an exotic and exciting locale for the Northerner and these excursions, along with his lodging at the St. James Hotel, are indicative of his wealth (United States Department of Interior 4). His musings on Florida business practice and fixation on the costs and value of Floridian orange groves suggest that A. B. Temple may have viewed Florida not only as a travel destination, but also as a potential business investment.

In the years following the resolution of the Civil War, Northerners began to flock to southern states and Florida was no exception. During the years of 1870-1880, the census shows that "Northerners were proportionally more numerous in Florida than in any other state of the former Confederacy” (Vance 3). Furthermore, this data shows that most of these Northerners were not farmers, as is the easiest assumption, but were mostly artisans and merchants (Vance 5-6; Tables II-A and II-B). One result of this trend was the St. James Hotel, which was financed and built by Northern investors and opened on January 1, 1869 (United States Department of Interior 4), earning the title of the largest hotel in the northeast in the 1880s. Further highlighting Northern business dominance is the fact that this hotel was the first building in Jacksonville to use electricity for lighting, hinting at the wealth of its owners and clientele. Temple remarks how “if it were not for the Northern folks that [came] here and have settled here there would not be much,” and it is probable that he is, in part, talking about the owners of the St. James Hotel. The St. James Hotel was destroyed during the fire of 1901, rebuilt by Henry J. Klutho and reopened as the Cohen brothers store by 1912, which may be indicative of a change in business needs of the local area (Florida Memory).

Florida began to see a boom in business enterprise, including in the citrus industry, after the close of the Civil War. Through his business rhetoric and his numerous mentions of the business workings of Florida oranges, it can be assumed that A.B.Temple was one of the many wealthy men who sought to invest in Florida and to diversify their business dealings during the post war era. Temple’s dealing with Mr. Davis, the owner of an orange grove, are suggestive of someone looking to understand the profit of such a business, especially during “the real boom time for citrus in Northeast Florida" (Thursby 21) which came "between the Civil War and the Big Freeze, when the state was finally stable enough for enterprise” (Thursby 21). This suggestion is furthered by Temple’s speculation about the ability to ship Florida produce all the way to New York.

Works Cited →
A letter by A.B. Temple to John